These were pulled by YouTube today.  What are they afraid of?

I fail to see how Rudy Giuliani speaking about the hanky-panky going on during the election is a threat to anybody - except maybe the crooks that actually pulled the hanky-panky?

And now onto Twitter's FACISM and HYPOCRISY.

The following is a pic of a tweet that Alec Baldwin posted: 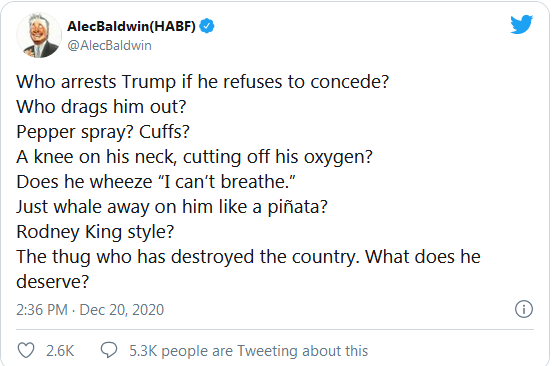 This tweet has inspired many other people to join in and talk about how to commit a murder against the current president of the United States.  Trump is not a thug, and he did not destroy the country.

If anything, it seems like people like Alec Baldwin with such hate-filled rhetoric are the ones that inspired people to riot.

I really wish this sick man would seek professional help - he needs it.

Personally, I did not like Obama, or Bush, or Clinton.  But, I never ONCE suggested that any of them should be murdered, tortured, or anything like that.

1. Charges brought against him for obstructing a United States Election.

Posted by ScareCrow at 5:25 PM