Nobody Stops to Think what it's Like to be the Other Guy...

...and when they do - they are usually WAY OFF.

This is something I am guilty of. Allow me to explain.

To start, a warning: I am going to talk about Elliot Rodgers.  I do not often talk about these spree killers - I find it tasteless - I do not want anything I say to be taken as praise - it isn't.  However; I feel obligated to point some things today.

I am from a lower middle class family.  My father started out repairing downed power lines for the power company - he worked his way through the ranks, and in his later years had an office job. He supported 4 kids and a wife.  So, growing up we did not have any luxury items.  All the cars in our family were used.  Houses we lived in were in less than noteworthy neighborhoods.

There is no way any of us could afford a brand new BMW - so of course, my father did not buy me one for my college years. 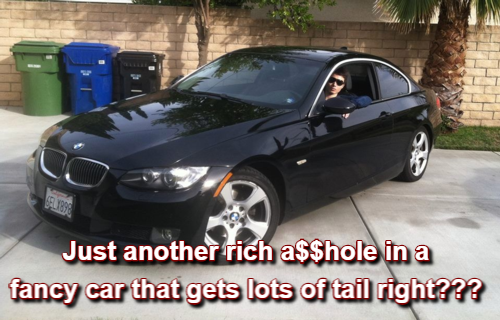 Now, I always assumed that one reason women found me so repulsive while I was in college was that I did not have fancy clothes (my wardrobe consisted of crap that was on sale at Ross and Marshalls), and I did not have a fancy car (in 1990 I obtained a 1971 Volkswagen rust bucket).  All my spare money went to my college tuition and books.  I always assumed that the women in college were attracted to men like - well, like in the picture above, and like this: 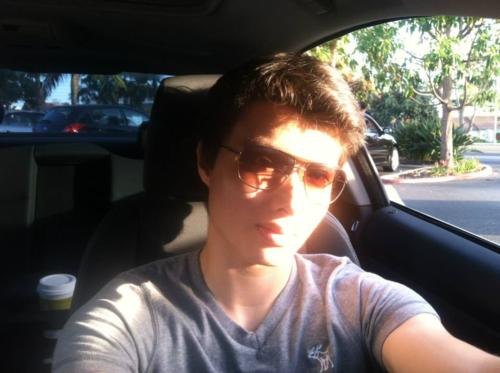 Young men who were from wealthy families and looked like GQ cover material.

After reading up a bit on Elliot Rodgers, I am now wondering if perhaps - all those rich kids in college (driving fancy cars and wearing nice clothes, donning brand name sunglasses - something I did not have) were as destitute and as lonely as I was...???

In other words - I did in fact stop to think what things were like for the other guy - but I now think that I was way off.

While I was in college, I had a group of friends - 5 of us total - and I was the leader.

I had no girlfriends - when I approached women - and I did so too many times to count - I got extremely hostile reactions.  For example, I would say something akin to 'Hello', and I would get responses like 'Fuck you', "Fuck off', "I am like way out of your league', 'Yeah right, I am too good to talk to you', 'Get lost', 'Don't look at me - I am too good for you', ...sometimes I would get laughter and a mumbly response like 'yeah right' - other times the women would just pretend not to hear me, roll their eyes and shake their head - you get the point.

I was alone, and unlike Elliot Rodgers, I did not expect to meet women by simply walking down the street - I knew I had to be aggressive and approach them and start dialog - all of my attempts were met with extreme hostility.  Of course after many years - like my final year in college - I had given up.

I never pondered the idea that maybe those guys with all the money, cars and clothes had it just as bad as me. I think now - that they probably did.  When you are that spoiled - you are used to getting what you want - and often will go nuclear when you don't...

I never stopped to really think what it's like to be the other guy...

I just assumed them to have it better than me. 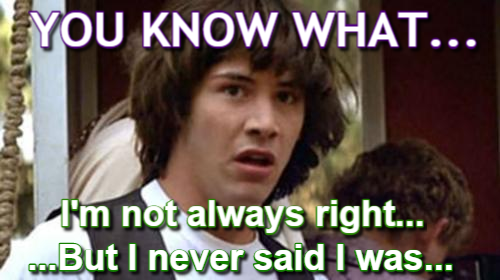 I have been reading through incel forums and various blogs (the comments).  I am not sure if I fit the description of a 'Chad' or not - my guess is yes.

I had it bad in college - and I did not sit on my ass expecting a woman to fall in my lap.  I pursued dialogs and approached tons of women.

I read those incel forums, and they are making the same mistake I made back then - assuming that the other guy has it better off because of: height, weight, skin color, economic status, ethnic background etc...

We are all men - regardless of weight, height, skin color, ethnic background, economic status - there is an extreme prejudice that exists in women because of brainwashing by a hateful movement called feminism.

It is that hatred we should be focusing on - and focusing on how to eliminate it.  The next time you think some guy has it better than you - think again.  Ask yourself this: Is he actually getting sex?  If he is - what price is he paying?  How whipped is that poor fool with that hot chick?  Yeah, he is driving a fancy car and looks like the proverbial 'hot guy' - does he have a girlfriend?  If he does - is she a total bitch that treats him like shit?

When I was younger, I made several assumptions about what kind of guys get the girls.  After reading up on Elliot Rodgers - I know I was wrong about that assumption.

Call it Sexual False Consciousness if you like - perhaps it was.  From my observations, it seems like the more evil men get the girls.  The flaw that many people make here is that Elliot Rodgers was himself evil - perhaps in the end - I am referring to men that have criminal records their whole lives - like say Chucky Manson - a short ugly WHITE economically impoverished wimp - traits that many incels themselves claim to have - yet they think those traits are negative in the eyes of women?!?

Charles Manson was born evil.  Elliot Rodgers became evil - don't believe me - google it.
And another point - which might offend some of my readers.

We live in an age where men are encouraged to be open about homosexuality.

Men are actually encouraged to be homosexual.

Any suggestion that these 'incels' are repressed homosexuals is just plain stupid - for real - really stupid. 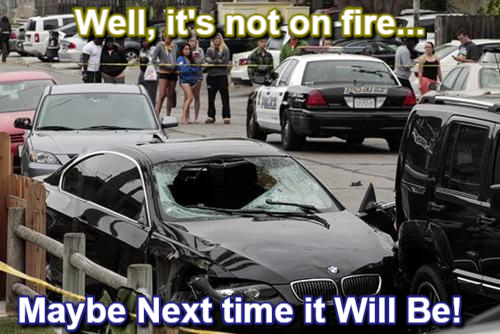 How many "incels" did Elliot Rodgers kill - young men in the same predicament - just as frustrated as himself?

DISCLAIMER: my humble opinion is that Elliot Rodgers was a spoiled brat who was used to getting what he wanted. He died during a temper tantrum he had. But I wonder - would it have hurt anyone if he got a girlfriend in his life?
Posted by ScareCrow at 9:13 PM