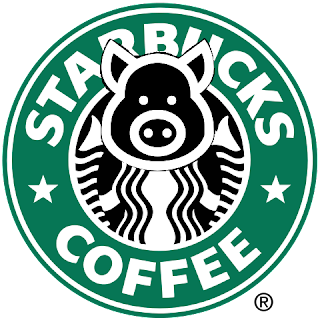 So, everybody has now heard about the police officer that went to Starbucks and got a coffee with the term "pig" on it. It is possible that not everybody knows about what his alleged daughter had to say about the man. My focus will be with the daughter and her willingness to betray her father. After all, this blog is devoted to anti-feminism and PRO-STRAIGHT-MALE - since there seems to be so little of it in our modern, enlightened, evolved culture.

Looks like a typical stupid spoiled cunt to me - notice the tattoos on her arm - leftmost picture.
In case you are wondering - this post is all about how backstabbing women can be ARE.

Officer CHIEF O'Mara - a man who risked his life - possibly getting shot at during his life to give his daughter a good life...
...and for what?

An ungrateful little shit that backstabs him the minute he gets put in the spotlight?

I wonder what this man's wife is like? I wonder how long it is before she backstabs him too. Maybe she already has?

At this point, some people might be saying, "but but but - she said he's a racist!"

Anybody worth his or her salt knows better than to trust the word of some stupid spoiled cunt. A spoiled cunt who herself is already getting accused of being a racist herself. The whole racist thing is irrelevant anyway - she is still a backstabber - whether her dad is racist or not.

I don't know if anybody remembers the David Hasselhoff eating a whopper drunk video. Basically, Mr. Hoff's sorry ass excuse cunt of a daughter video recorded him drunk eating a hamburger and decided to attempt to ruin him with it.
Here is a video parody of the incident - turn your volume up and listen to the narrator...
Listen for something like this, "You bought me everything Dad, now I'm going to destroy you!"

Work your life off, bust your ass, defend those wymminz, and this is how you'll be treated. If you are stupid enough to believe that you are somehow immune because you're 'one of the good guys', well then - you are way beyond pathetic.

Modern misandry has gotten so thick women are not capable of distinguishing which men are the useful tools and which ones are not - their guns point in all directions. No matter who you are, no matter what you believe, no matter what you've done, their cannons are ALWAYS pointed at you.

I suggest you defend yourself, or become the next victim of the thicker than pea soup misandry that has infected this cuntry, 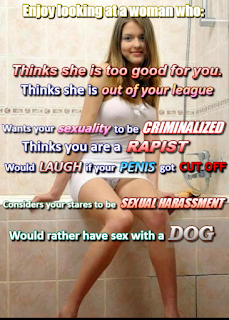 Posted by ScareCrow at 2:28 PM