The Most Toxic Type of Woman of All...

I was going to talk about the new Clint Eastwood Movie, Richard Jewell - it's about a man who was falsely accused, tried and convicted by the American Overrun with Dikes and Faggots Media Greedia back in the 90's.  BUT - it doesn't start until December 13th.... SO!

I picked up a troll.  This troll made me think a bit.

I have met women who I consider to be "different".  They do not hate men.  They recognize how much hatred of men exists...  But those women are seriously too far and too few - I'd make a guesstimate of about at most 1% of women are like this.

Yes, I said it - I'd guess about 1% of the women in this CUNTry are actually tolerable, and not vicious little falsely vindictive cunts.

I have met several women like this.  They all had one thing in common - they are misogynists.

Yes, they hate women - like no holes barred hate too.  I'd go out on a limb and say they themselves were embarrassed to be women because of the way other women act - and that is what makes them hate women so much.

NONE of them - and I mean NONE criticized me, or had any kind of negative reaction to what I had to say about women - be it my stereotyping or my prejudiced.  They recognize that such things are a normal and sane reaction to the societal crisis that is occurring - namely, feminism, male-hatred and the extremely destructive effects it is having on Western Culture.

NONE of them - and I mean NONE considered being a woman a handicap.

Any sane rational woman who truly is capable of thinking for herself fully recognizes the thicker than pea soup misandry that has infected our society, and sees how much damage it is doing.

Well, I say she is EXTREMELY TOXIC.

This is the woman who wants us to shut up because she is different.

Who cares about rampant out of control male hatred.

Who cares about all female audiences applauding and cheering male sexual mutilation.

Who cares about women having sex with dogs instead of men.

Who cares about lying about domestic violence.

Who cares about making violence against men acceptable (sic V.A.W.A.)

Who cares about lying about a wage gap.

Who cares about lying that all men are rapists.

Who cares about lying that all men sexually harass.

Who cares about false rape accusations.

Who cares about fabricated 36 year old "groping" being taken seriously.

She is different, and that is all that matters....
So we should all just shut up...

These are the most vile cunts of all. 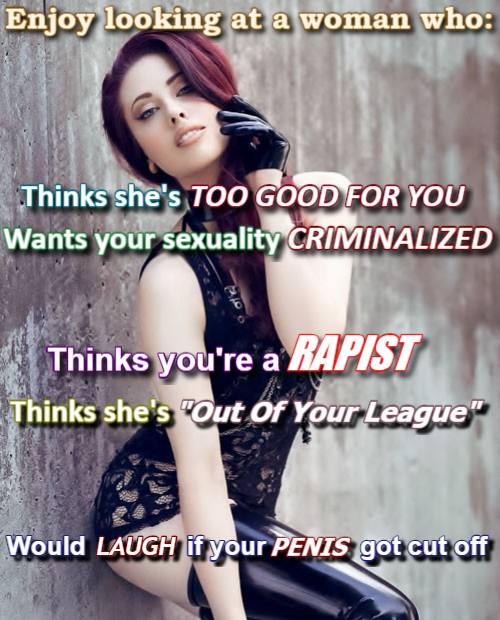 Anyhoo - I want to wish all of you a Happy Thanksgiving.

If you are not in the U.S. well, relax with some good TV or laugh at some YouTube Poop...

If you are by yourself - enjoy a beer at home - don't drink and drive.
Posted by ScareCrow at 10:26 AM