I Can't Believe I Was DUMB Enough to Listen to this Guy...

So, my curiosity got the better of me, and I watched Paul Joseph Watson's latest youtube video, "The End of Western Civilization".

As usual, he made sense.  He talked about the destruction of families, drugs, deterioration of religion...

It all sounded so nice.

But then I thought...wait...no mention of feminism or the intrinsic hatred of men.

That's right.  He does not mention feminism at all.

You'd think that it'd be mandatory for any video talking about the end of any civilization to mention women, their intrinsic hatred of civilization, their seething hatred of men, their greed, their stupidity and their sense of entitlement...

But no.  Not one mention.

I can't believe I was DUMB enough to actually listen to this guy at one point.

Drink Responsibly.
Posted by ScareCrow at 8:34 AM 10 comments:

Seriously.  What a joke. 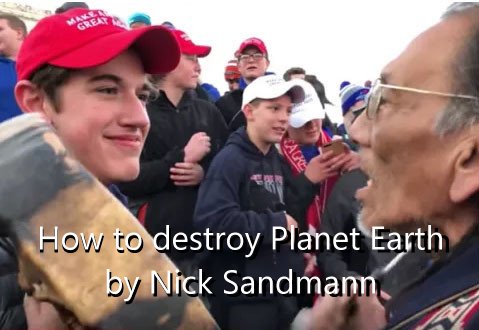 I guarantee you that Nick Sandmann will not see one god damned penny.

We all heard about the white males violently surrounding a harmless and peace loving native American and taunting him with chants about building a wall.

Then we hear it's a bunch of bullsh*t.

Then we hear that Nick Sandmann is going to get a buhjillion jillion dollars.

More bullshit.  He isn't going to get a f**king thing.

Nick Sandmann is a white heterosexual male - the lowest form of life in America today.

Death threats, close the schools because of bomb and death threats - who f*cking cares.

The media certainly does not.  The media cannot even admit when they are wrong.  More cover ups.

When they can't cover it up - and the world sees how wrong they are...

More cover up, more bullsh*t to make the millions of people who witnessed the truth feel like there is justice - and there isn't.

The lawsuit will NOT go through.

If it does, some obscure court somewhere will overturn it.

Yes, the lawsuit is more fake news.  It is fake news designed to make people feel like the media gets held accountable for the truck loads of cow sh*t they shovel into the American public's face every day.

The media is not held accountable for anything they say.  There is nothing anybody can do about it either.  The most powerful man in the world - the President - is powerless to do anything about it.

Given that - what can any of us do about it?

Why all the white hatred? Read this

If you think I am skeptical, try a google search for lawsuits against various media outlets - none of them go through.

Here's a small sample of the lawsuits that Sarah Palin filed.

None of them go through.  The media hated Sarah Palin because she really does think for herself and is not a butt ugly man hater like feminists want - the same reason the fag-o-sphere/MRAs/MGTOWs hated her too.

Sorry for being so negative lately.  I will be returning to my humorous posts soon.  As I get more and more into the career I have chosen (gaming) - I realize that it is run by a slew of incompetent f**k ups.  It is dominated by people with no creativity, no common sense, no vision and sh*t for brains.  They somehow rise through the ranks by feeding off the creativity of others - yes - at the last place I worked, I had all my game ideas appropriated by phony "big wigs" who later claimed it was their idea.  Even in casinos - I see the suggestions I made put in play in many modern games - of course I received no credit for anything.  The ideas that I came up with in the games are awesome - even though the games themselves typically suck ass.  The whole thing is very depressing.  I'll get over it though.
Posted by ScareCrow at 7:45 PM No comments: