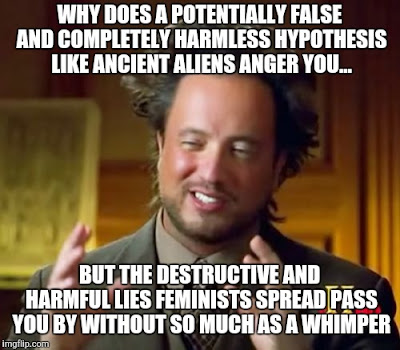 Can somebody explain that to me?

Aliens did visit Earth in the past...if that is NOT true...what harm is there in stating it?

Compare that to the harm feminazi false facts do...

The MEN hosting the show "Ancient Aluens" make the claim that aliens visited Earth in the past, and some people get enraged, some people pour on the ridicule, some people scream how stupid they are...

Feminists claim that 33% of women will be raped while in college......crickets.

If anybody can explain this phenomenon to me, please do!
Posted by ScareCrow at 2:56 AM 7 comments:

Why They Hate White People

When I was in college, there was a middle eastern woman who regularly wrote articles in the school newspaper about how straight white men majoring in hard sciences were "terrible people".  I always wondered why that woman was such a racist cunt supported equality so much.  She was from India if I recall right.  Yes, India - a country filled with "brown" people - no diversity there!

Observing people lately, I have come up with an answer.  It might sound silly.

They hate white people, because they are racist.

No, that statement is not what you are thinking.

They hate white people, because of all the races on earth, white people have done the most to end racism.

At this point, morons are saying, "WHAT ABOUT HITLER!!!!"

Yeah, Hitler ordered the execution of many people... WHITE PEOPLE YOU DOPE.

When these people hate whites, it is not a simple hatred of skin color.  It is a hatred of the fact that we have done the most to stop racism - and they cannot stand that.  My ancestors played "nigger records" and allowed black people in their restaurants - often at the risk of their own lives.

That is what these people cannot stand.

Now, if you are not white and reading this - relax.  I know that the people spreading this "white hatred" are not "un white".  They are in fact the "intellectual elite" white people.  The non white people that agree with or support their philosophies are simply the modern day "Uncle Toms"...

You know - the Colin Caperdouche's of the world - the Zarna Joshi's - they are the modern day "Uncle Toms" - as they are simply useful tools to spark the flame of racism and bigotry once again.

Of course, there are some intellectual power houses that are not white who fuel this regime as well - but they are a minority that you must pity - because ultimately - they too are tools for ignorance and hated.
Posted by ScareCrow at 9:52 AM 1 comment: