You're a Misogynist Charlie Brown. 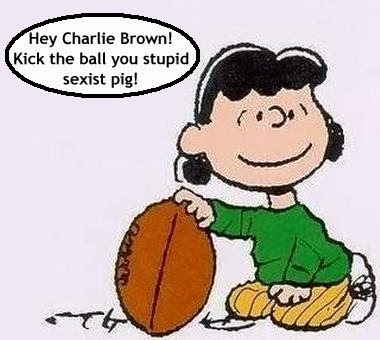 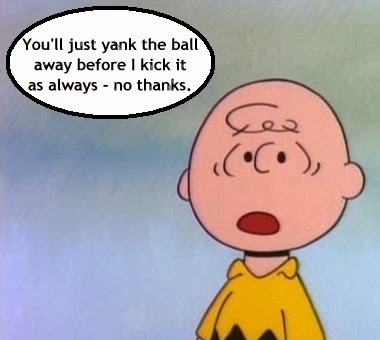 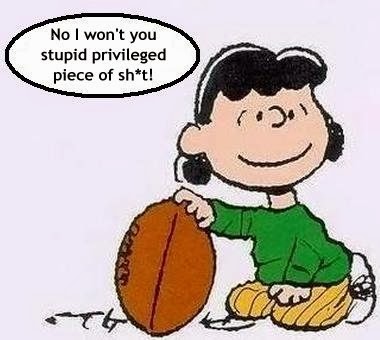 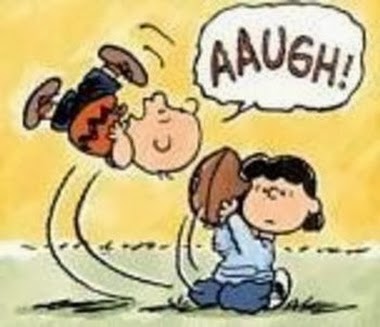 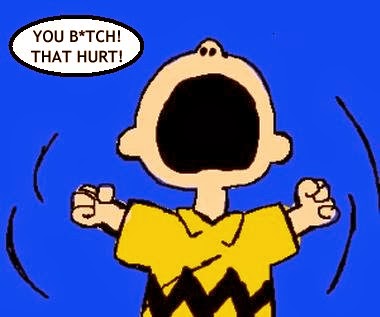 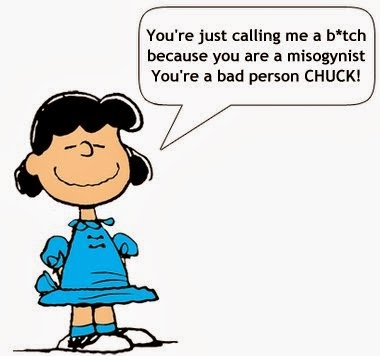 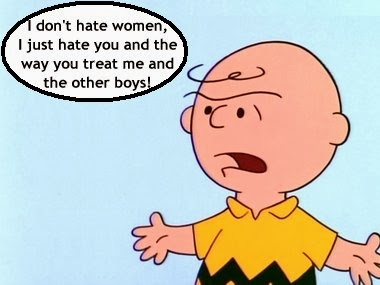 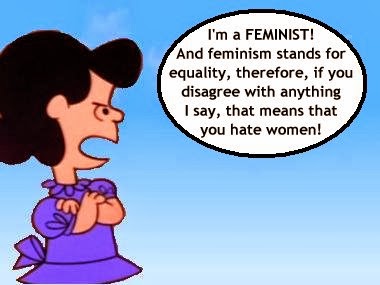 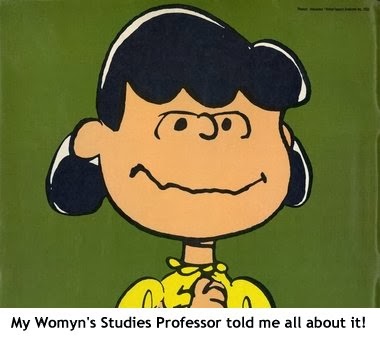 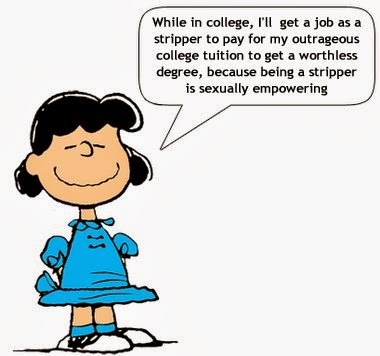 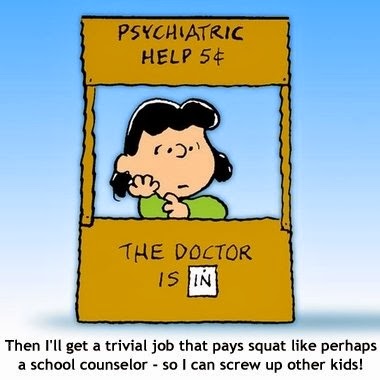 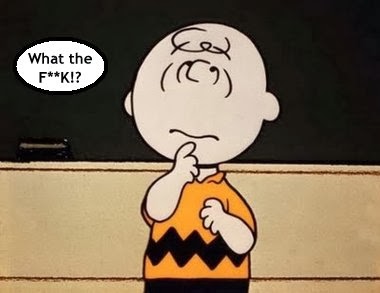 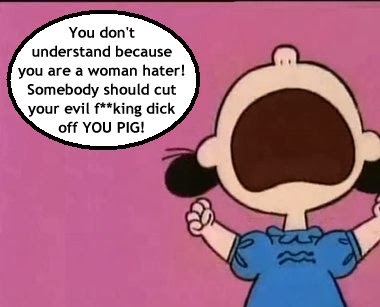 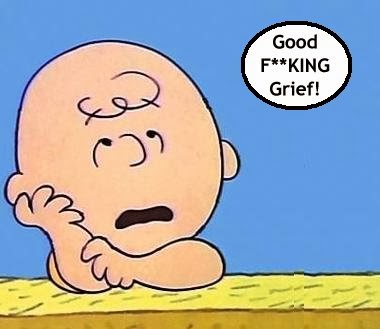 Well, it has finally happened in our society. A demon seed of unspeakable misogyny and evil has sprouted from our communities loins. A satanic being who blasphemes the divine vagina has arisen.

Luckily, our society is well prepared to deal with this most foul of creatures!

Hunter Yelton was caught doing the most despicable act imaginable.

Sorry, this reporter is having trouble mustering the courage to speak it.

Give me a minute to collect myself - THE PURE EVIL AND INSANITY OF THIS YOUNG MISOGYNISTIC YOUNG BOY - THE HORRORS... 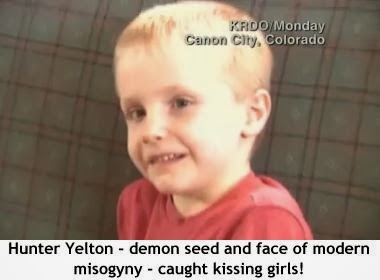 Hunter Yelton was caught kissing girls on the hand.

The situation is being dealt with. Authorities at the school have captured this most foul and evil hell spawn and charged him with sexual harassment.

If there is any justice - any justice at all in this world - our society will see fit to dispose of him via electric chair for committing such an unspeakable act - kissing girls hands.

We have also received reports that this possessed preschooler violently rapes BITCHES! 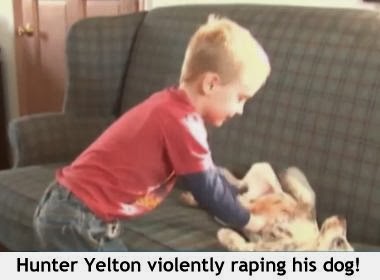 Clearly, the misogyny in our society has reached critical mass. Young girls in school are now having their hands violently attacked and savagely raped by boy's lips!

MEN-Factor reporters have talked to the most holy of holies in the Catholic Church. The Catholic priests say that this boy is not demon possessed, but a hot piece of boy meat perhaps Satan himself - since only the devil would allow heterosexuality to flourish. The faggots priests said he needs to be ethnically cleansed.


ALL JOKING AND SARCASM ASIDE.

Suppose for a moment if this young boy wanted to kiss other boys...

Would he still be getting charged with sexual harassment?

Would he be getting an award for "being brave about his sexuality"?


Our society HATES and DESPISES men and boys. The more sexual they are - the more they are hated and punished.

Suppose for a moment that a girl was going around kissing boys?

Any punishment? Probably not.

Suppose for a moment a girl going around striking boys in the crotch?

Would she get an award?

Would she get her own T.V. show?

Suppose for a moment - is this the kind of thing that sick f**ks like Jessica Valenti, David Futrelle, Adria Richards and others whack off to at night?

Seriously - they are charging 6 year old boys with sexual harassment for kissing girls hands - nobody is being hurt - and all of those people claim this is part of "rape culture", "misogyny in society" and whatnot.

How do these severely f**ked up people even sleep at night?  Or look in the mirror without spitting on it?

Oh yeah - they don't - they have nervous breakdowns or try to kill their girlfriends like Hugo Schwyzer - nevermind...

Watch for it – hopefully, I’ll find time on Friday –I am guessing that the entire school board has already gotten threats and cussed out – so they have gone into hiding – I am going to “try” to get a complete list of names…
Posted by Richard at 6:18 PM 8 comments:


However; not every dude is a self-purported nice guy, and hence, they just don't get into the holiday spirit.

Such was the tragedy victory against evil male oppressors celebrating genocide against Indians Native Americans on November 29, 2013.

It appears that this sick f*ck outstanding man... 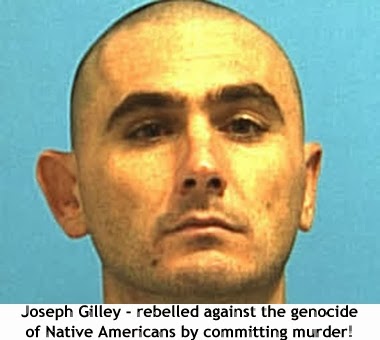 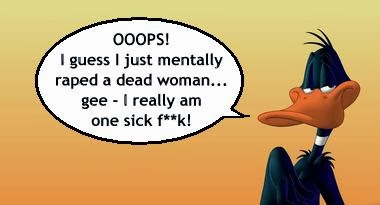 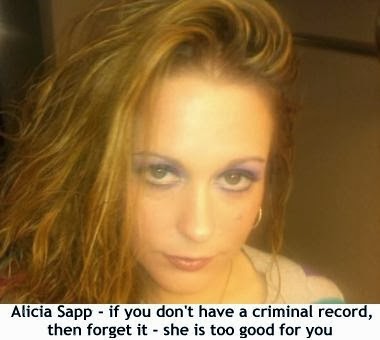 Alicia Sapp - and forget it - she is like - way out of your league you pig! Not just because she is good looking and too good for you - and not just because you are one of those creepy self-purported "nice guys" (who doesn't have a criminal record and too well raised to commit a double homicide after Thanksgiving) - but also because she is - well - dead. So forget it!!

And, Joseph Gilley also killed his own father... 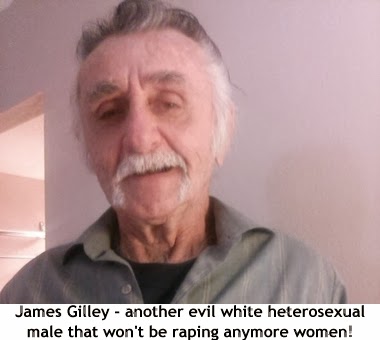 This sick fuck outstanding young man (Joseph Gilley) who had the courage to not call himself a "nice guy" rebelled against the Thanksgiving Spirit (a spirit that celebrates genocide and cutting everybody's noses off according to one psycho bitch young female journalist straight out of the cesspools of heterosexual-male-hatred our modern day higher learning facilities). He also rebelled against the patriarchy by killing his own father.

Instead of being a "nice guy" and celebrating such tragic evils committed by white heterosexual men, Joseph Gilley decided to get revenge for the nice, peaceful Native Americans who piss cherry coke, fart rainbows and poop jelly beans - by murdering two people. And yes, you heard it right - one of the victims was his own father.