Well, the incident that took place in Colorado is indeed tragic and repulsive.

And there is a dimwit professional Psychiatrist claiming that all men need to "atone" for crimes committed against women.

I wonder - does that include men who used to have a penis but are now transgendered?  I doubt it...

His name is Dr. Frankenstein, I mean Dr. Peter Breggin.  He claims that all men must atone for the tragedy that occurred in Colorado.  MEN-Factor reporters were allegedly able to interview him.  The interview was difficult to perform, because according to sources, he had several women tied up at his place and they kept screaming. 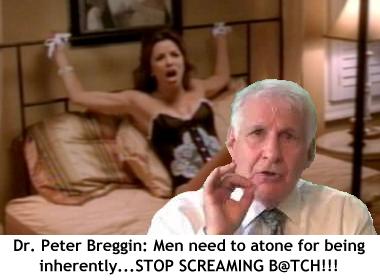 Dr. Peter Breggin claims that men will burn in hell if they do not atone for the sins that a small number of men have committed against women. 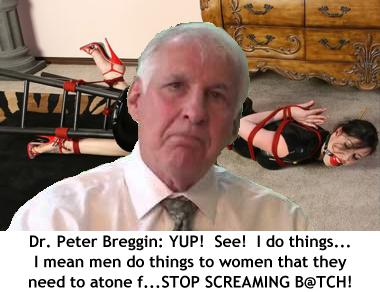 Dr. Peter Breggin claims that men are inherently violent towards women, he allegedly said, "Why, just last week, a woman asked me what time it was, so I pushed her into my car and shoved a glove - WOULD YOU ALL PLEASE STOP SCREAMING!!!  Damned B*tches!" 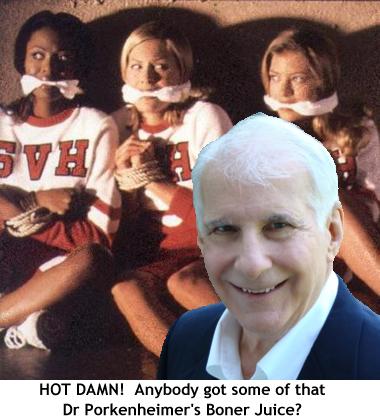 Dr. Peter Breggin was eager to continue the interview, but the screaming noises coming from the various rooms in his house were over bearing, he came back to reporters and asked them if they had any Dr. Porkenheimer's Boner Juice 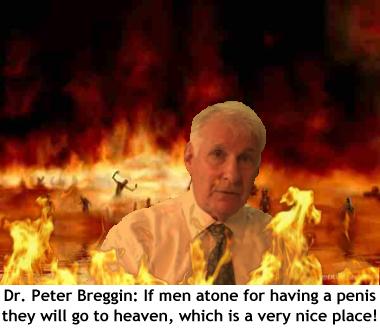 Dr. Peter Breggin claims that if men atone for having a penis er uhm the small number of men who commit crimes against women the overwhelming hugantic colossal atrocities that get committed every 5 minutes and twice on Saturdays when his supply of Dr. Porkenheimer's Boner Juice gets delivered, men will go to heaven, which is a very nice and warm place that makes you feel all fuzzy inside - like amoebic dysentery does.
Posted by Richard at 10:55 AM 14 comments:

Here are some MEMEs for your Monday.  I have not done any of these in a long while...

You are free to copy, use, distribute these in anyway you like - and you do not need to credit me... 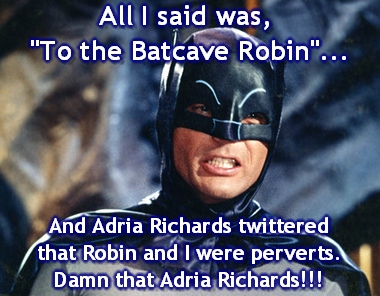 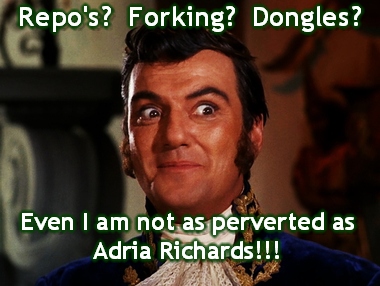 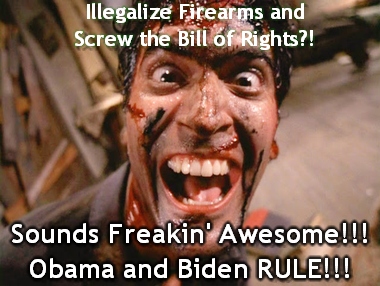 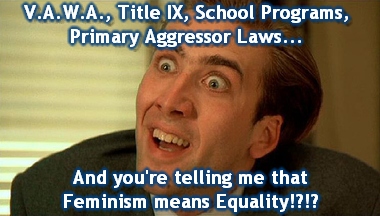 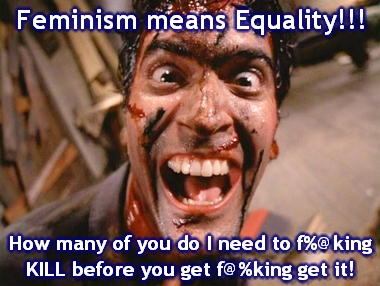 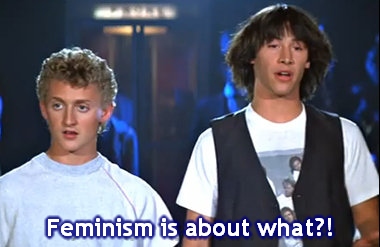 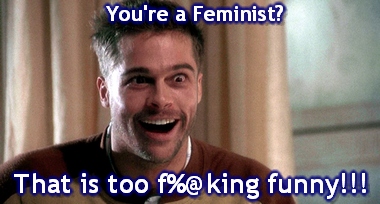 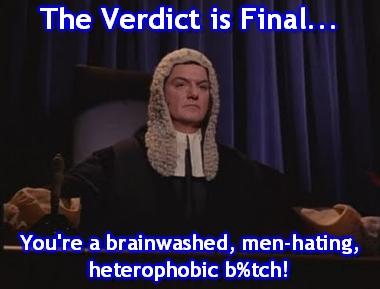 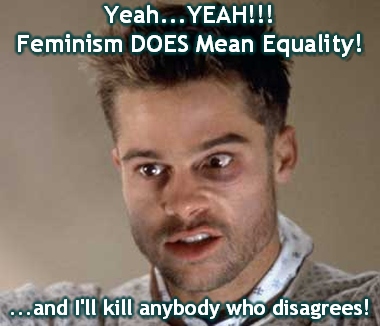 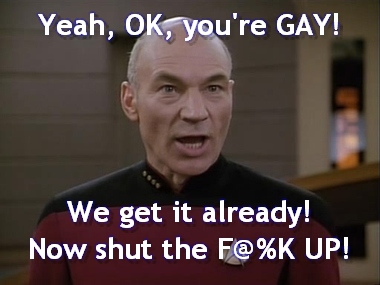 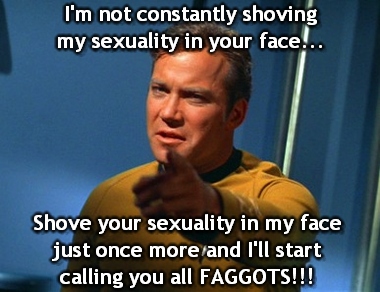 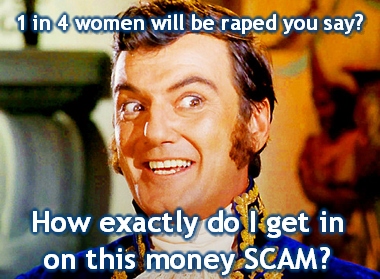 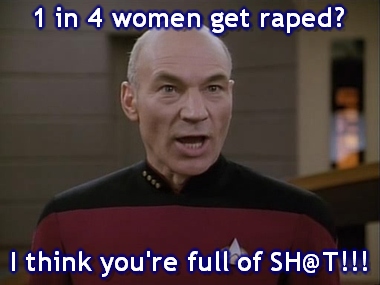 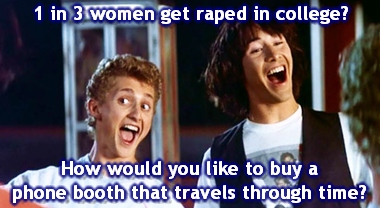 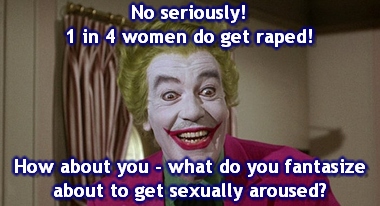 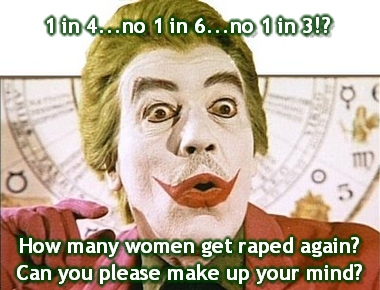 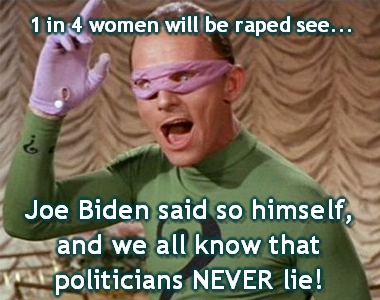 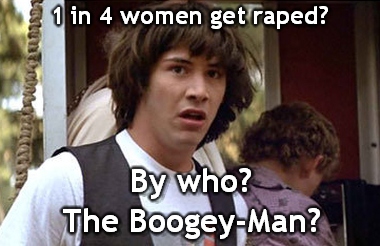 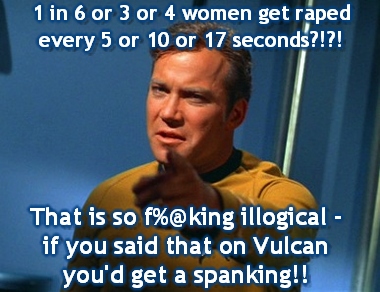 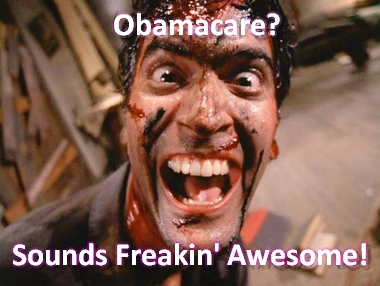 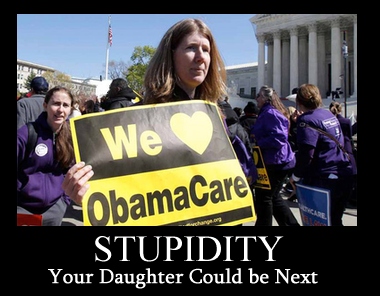 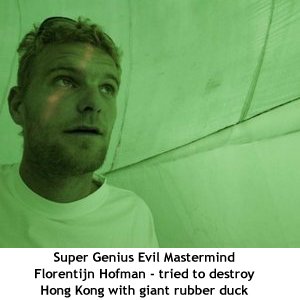 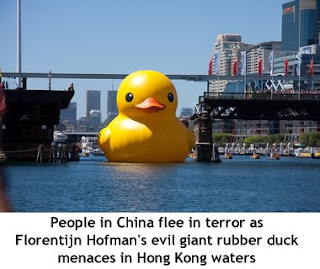 People in Hong Kong fled in terror as the giant rubber duck came barreling into the harbor - leaving a path of destruction. 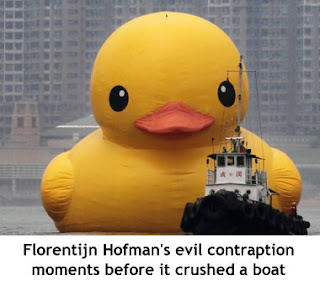 The giant rubber duck smashes a small boat!  Will nothing stop Florentijin Hofman!!!!


Fortunately, Florentijin Hofman's plans were thwarted, when a giant baby emerged from the water, apparently thinking the lake was a bath-tub. 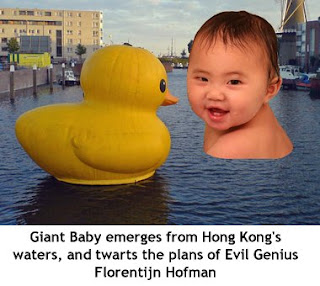 Scientists speculate that the baby is not Chinese, but Japanese and a result of the recent radiation spill they had from their nuclear power plants.

We asked leading commentator Giorgio A. Tsoukalos on The History Channel about how the giant baby could have made it from Japan to Hong Kong... 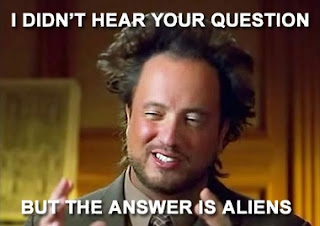 How the baby got from Japan to Hong Kong is anybody's guess.  We currently believe that Godzilla may have transported the child there after Godzilla got tired of the smell of soiled diapers.

Whatever the case, thank God and Godzilla that Hong Kong is safe.

We can now sleep easy over the weekend.  I know I will!
Posted by Richard at 1:58 PM 4 comments: