Perfect Portrayal of a Post-Feminist Woman

Thanks to "itsyoureternalsoul" for the pic: 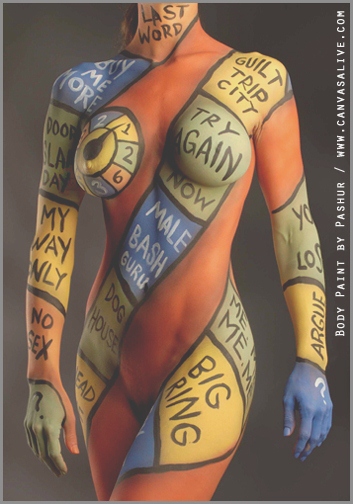 A picture is worth a thousand words - this one is worth a million!
Posted by Richard at 9:14 AM 13 comments:

What I Did on Sunday...In My Mother's Basement

First,I went to the dog park.  There were not many people there.  In fact, people kept coming and going.  I briefly talked to a couple from Alaska, a man who was born and raised here in Nevada, and a woman who moved here shortly after I did (1984). 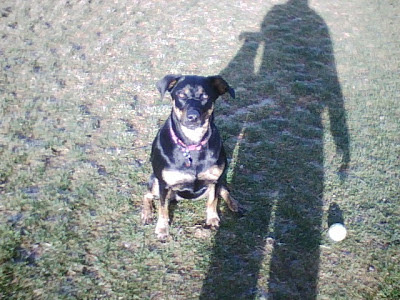 In the late afternoon, I took my dog Spree on the Huffaker Mountain Trail.  Near the end of the trail, I found this... 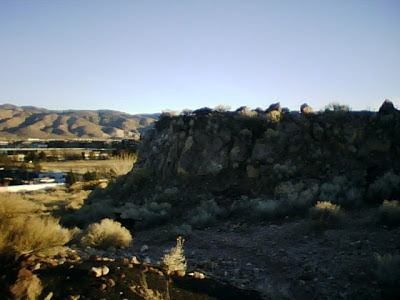 And I decided to climb it (even though I am not supposed to "exert" myself according to my doctors...) 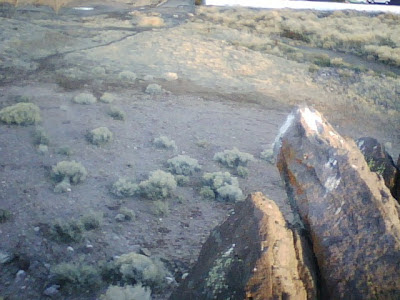 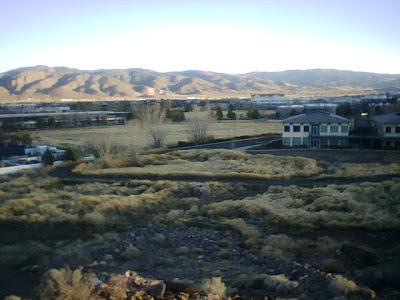 So, why show you all of this?  Well, according to some feminists and MRA's, apparently, I live in my mother's basement...

Ya gotta wonder how all this stuff magically appears in my mother's basement...

Oh yeah, according to one MRA, I am "more dangerous" than feminists, because I refuse to think of men as dumb animals who "think with their dicks"...

The more I explore the "man-o-sphere", the more disgusted I get with it - save for a few blogs here and there...

My favorite attitude - when somebody (some dude who definitely isn't me) makes a suggestion or comment - or even asks a question - they get attacked.  The whole thing is a joke at this point.  The latest thing I read on reddit is that the MRM and feminism are actually "on the same side".

I could not agree more - not in a good way.

Well, sorry, not an actual murder, but more like a death in a fire-fight with police.

Thanks to Eric for the link.

This luscious young babe was smoking hot.
Until she was killed by a police shot.
She could have any man of her desire
She rejected normal men for police fire
The next woman to reject any of your flirts
Just remember
In a while she’ll probably be buried in dirt

The media assumes that I am going to care
About a woman who’d give me dirty stares
I hate to come across as being harsh and blunt
But I don’t give two shits...
Rot in hell you stupid c*nt


It’s your dishwater – you soak in it. 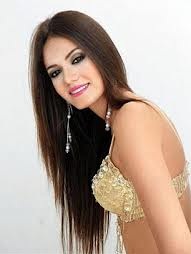 Now, what can I learn from Maria Susana Flores Gamez's death?

Well, apparently the reason I kept getting told to “fuck off”, “fuck you”, “don’t look at me I am too good for you”, and “I am like way out of your league” when I was in late high school and early college, is because I was not a member of a drug cartel that wanted to use a beauty queen as a human shield!

Since I admit that I could not use a woman as a human shield, that makes me a “self-purported nice guy”, which according to feminist theory – means that I am not really nice.  So avoid me at all costs ladies!!!!

DAMNED! I knew there was something gosh darned awful about me that the ladies didn’t like – and now I know what it was…

I am in serious need of an attitude adjustment just like the feminists say – if I hadn’t been civilized, and not given two shits about other human beings, and low enough to use people as human shields… damn…

Instead, I would have walked up to one of those hot college chicks (of which 1 in 4 will be raped every five seconds by some dude like me – NOT) – and said, “Hey, I am a member of a drug cartel, and I’d like you to be my human shield in case the cops try to bust me”.

Flooding in Reno: Oh the HORROR!!!

I have to warn my readers: this post contains shocking and horrible pictures of the flooding that occurred in Washoe County (the county that I live in and where Reno is).

The flooding was supposed to be so damned severe that they actually issued a state of emergency.

And thank God they did!!!

The pictures below demonstrate how much money was needed by the federal government for this absolute catastrophic event. Also, it is a good thing that they put plenty of firefighters, police and paramedics on stand by earning double time for their services during this, Reno's darkest hour.

Again, I have to warn my readers that the following images are very graphic and disturbing. And again, I re-iterate, it is a good thing that Washoe County got oodles and gobs of money to combat this latest disaster.
It is also a good thing that all those police, firefighters and paramedics (the ones not retired and getting fat on pension money that we all pay for), were getting paid double time by our tax money to sit around and do nothing.  It sure made me feel safe!

To start, as you can see below, the Wal-Mart parking lot was nearly a complete lake: 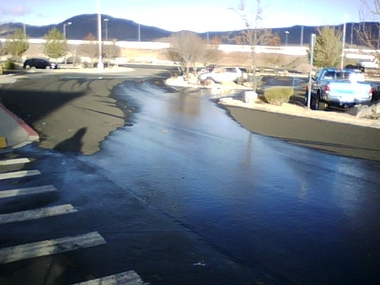 Look again at the parking lot of Wal-Mart - notice the forboding sky and torrential downpour of rain that occurred this Sunday Afternoon: 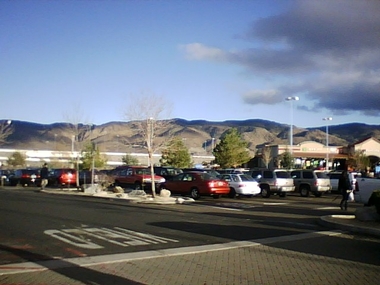 I stopped by a Walgreen's too.  As you ca see in the photo below, the entire ceiling collapsed.  I asked the young lady at the check stand how many people were killed when the entire ceiling collapsed.  She claimed that nobody was hurt, and that she did not even notice the damage to the ceiling (obviously, the young lady was in extreme shock and in a state of denial).  MEN-Factor reporters estimate that nearly 100,000 people were killed when the ceiling came crashing down - and nearly 250,000 people were severely injured. 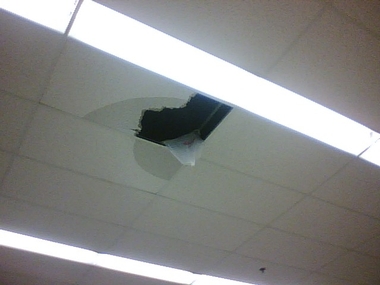 I braved myself to the Link Piazzo dog park.  As you can see in the picture below, it is now LAKE Piazzo dog park.  MEN-Factor reporters estimate that nearly 300,000 people drowned to DEATH in the puddle next to the benches during this terrible terrible flood. 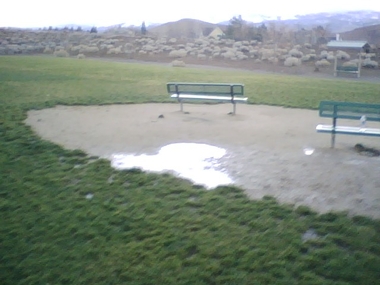 Luckily, no dogs drowned during the flood - even those dogs that were attending the park - as you can see in the photo below. 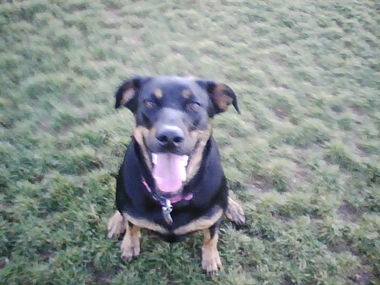 Now, we should all be thankful that our government spent so much money and got as many people as possible scared about this terrible flood that occurred.

I personally was kind of bummed, because I had started building an Ark, and was planning to put two of each animal on it.

I just hope that I can get all that money I spent back from the pet stores I went to yesterday.
Posted by Richard at 6:55 PM 6 comments: