Anna Z. Butts, a woman’s studies professor at Ding-Dong University decided that it was time for a change, and being so incredibly stupid, she decided that change was to take the form of some really harsh criticism aimed at men – because she seriously believes that no such criticism already exists.  MEN-Factor reporters were on the scene at Ding Dong University for an interview 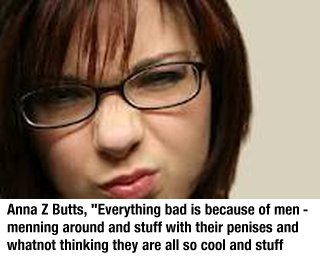 Feminist Leader Anna Z. Butts had this to say, “Yeah, the bad economy, global warming, and the juices of fruits other than oranges - everything bad is because of men – menning around and stuff with their penises and whatnot thinking they are all so cool and stuff. I mean seriously, they just walk around with their dicks hanging out, twirling them around and whatnot like they are soooo cool, I mean seriously, what a bunch of men and stuff.”
Clearly, her approach was slightly more sophisticated than, “boys are stinky” or “boys are icky”. By being more sophisticated with her language, Anna hopes to appeal to a wider audience of women, and encourage them to hate men with all their being men, menning around stuff with their penises and whatnot.

Campus Rape is no Laughing Matter, Now More Than Ever!

Rape on campus and you, no laughing matter; even when we don't.

Violating campus Non-Consensual Sexual Conduct policies are examples of no laughing matters that follow below:


Amanda and Bill meet at a party. They spend the evening dancing and getting to know each other. Bill convinces Amanda to come up to his room. From 11:00pm until 12:00am, Bill uses every line he can think of to convince Amanda to have sex with him, but she adamantly refuses (by that, we mean that she is giggling the whole time Bill is talking to her and saying, "I don't know"). He convinces her to give him a "hand job" (hand to genital contact) in exchange for a French Tickler (feather to anal contact). Amanda would never had done it but for Bill's incessant advances and his offer of the French Tickler. He feels that he successfully seduced her, and that she wanted to do it all along, but was playing shy and hard to get. Why else would she have come up to his room alone after the party? If she really didn't want it, she could have left.

Bill is responsible for violating the university Non-Consensual Sexual Contact policy. A university hearing board would find Bill guilty of sexual misconduct, since they never got any when they were his age - and dang - that Amanda chick is hot!


Jiang is a junior at the university. Beth is a poor young innocent sophomore. Jiang comes to Beth’s dorm room with some mutual friends to watch a movie. Jiang and Beth, who have never met before, are attracted to each other. After the movie, everyone leaves, and Jiang and Beth are alone. They hit it off, and are soon becoming more intimate. They start to make out. Jiang verbally expresses his desire to have sex with Beth. Beth, who was abused by a baby‐sitter when she was five, and has not had any sexual relations since, is shocked at how quickly things are progressing. Beth agrees to have sex with jiang. As Jiang takes her by the wrist over to the bed, lays her down, undresses her, and begins to have intercourse with her, Beth has a severe flashback to her childhood trauma. She wants to tell Jiang to stop, but doesn't. Beth is stiff and unresponsive during the intercourse. Is this a policy violation?

Jiang would be held responsible in this scenario for Non Consensual Sexual Intercourse. It is the duty of the man - ooops - I mean sexual initiator, Jiang, to ask the woman every 5 seconds, if she still wants to have sex. If he fails to do so, or if she says no, Jiang is guilty of sexual misconduct. If she fails to answer, or even says yes, Jiang may still be guilty of sexual misconduct. In fact, even if Jiang simply reminds her of her childhood trauma, and does not even have sex with her, or even makes eye contact, Jiang may still be guilty of sexual misconduct. Of course, consent does not need to be verbal, it must also be verbal. So, although Jiang did not rape her, he still raped her - no matter what, even if no sexual intercourse occurred, Jiang is simply stinky and eats his own bougars, or, he reminds Beth of her childhood trauma, and that hurts Beth's feelings. And that just isn't nice. Sure, Jiang didn't actually do anything to her, assuming that they never actually met, but he is a man, and if a woman is victimized by a man, all men must be blamed somehow. It's not just good for the economy, but good for the enchanted bag of walnuts our senators frequently snack on.

Kevin and Amy are at a party. Kevin does not realize that Amy is a deeply troubled young woman, and takes Lithium for a bipolar disorder. Amy is shaking her butt and flashing her tits at Kevin repeatedly. Kevin mistakes Amy's behavior as being slightly under the influence of alcohol - boy is he wrong! Amy continues shouting really loud and acting like a complete attention whore; being excessively flirty and offering pretty much every man in the room a blowjob. After the party, Kevin walks Amy to her room like a complete idiot, and Amy comes up to Kevin, pulls his pants down, and starts performing oral sex on him. Kevin asks her if she is really up to this and whether or not she has oral herpes, and Amy says yes and no. Amy suddenly goes bat-shit crazy screaming about evil demons peeing on squirrels.

This is a violation of the Non-Consensual Sexual Intercourse Policy. Kevin should have known that Amy was incapable of making a rational, reasonable decision about sex since she is a woman. No woman is truly capable of giving consent, even if she is sober. By proclaiming this, it is therefore possible to charge any man with rape, bring media ratings up, stimulate the economy, and maintain our outdated puritanical medieval lines of thinking that glorify women, over-victimize them, and completely demonize men.

Two students, Dick and Jane are in separate trains heading in opposite directions. If Jane's train is heading west at 80mph, and Dicks train is heading east at 75mph, has Dick violated the campuses sexual conduct policy?

This is a violation of the Non-Consensual Sexual Intercourse Policy. Even if Jane could not see one of Dick's testicles, she still knows that they are there - somewhere on the train, and she feels violated by them. In fact, she feels more violated by his right testicle than his left testicle. This makes Dick even more guiltier; now more than ever!

Rick and Ragina meet at a party. They are having a blast, and think the other is totally hot. At the end of the evening, Rick's Dick ends up going into Ragina's Vagina!

Al and Natalie meet at a party. Al rips a fart.

Clearly, Al has violated the Non-Consensual Sexual Intercouse Policy. Al farted without first asking Natalie if it was OK. That is, he did not have her consent to fart. Al should have sat quietly like a beaten dag, held his farts in, and not uttered a word to anybody ever because he is a man and has a penis. Having a penis is a direct violation of most campus policies. Unless stated possessor of said penis is a flaming liberal, smokes pot, and is working on a worthless degree in the Liberal Arts - like say Women's Studies or Psychology.