Well, A friend of mine pointed something out about that old "Dear Woman" video. I am recording a rant about it.

Anyway, I found this link and left a comment under the alias "Richard Fartswell". Check it out, and remind these clowns of how much you object to them validating 40-50 years of anti-male hate-speech and angry feminist verbal diarrhea.

And, check out my video I made called, "Dear Man" (in case you haven't already):

I am working on a utility - basically, to consolidate all the utilities I made - into 1 utility, then, I'll be able to crank these things out real fast...

Not that it takes me that long to crank out now... It's just kind of a pain in the arse - and, if I make a mistake, or decide I want to change something - I usually say, "NAH", because I have to do it all over again...

Also, I am going to try something different - Over the holidays I plan to do an Audio rant that I'll post onto YouTube - encouraging people to help men - whether they make mistakes in their life or NOT.

One thing that bothers me, that I have noticed lately, is the attitude towards men who make mistakes. Sure, men get married even these days, when it is a raw deal. But, I'd say that usually, that is done out of stupidity. As the addage goes, there is one born every minute - Instead of punishing these men, or wanting to see them hurt, financially ruined - I plan to do what I can to help these men.

My overall attitude is as follows: here is my advice, I suggest you NOT get married - take it or leave it. If you decide to leave it and things go bad - guess what

I WILL BE THERE FOR YOU, BECAUSE I AM IN YOUR CORNER - I AM ON YOUR SIDE.

I am not going to go sadistic on you because you don't do exactly what I say...

Man Violently Attacks Woman’s Handgun Using His Face, then Attacks Her Knife with His Torso 27 Times!

Sorry for the disturbing news friends, but it appears that various women’s groups around the country were right. Misogyny is completely out of control these days. I just heard a story; a man has recently attacked a woman’s handgun using his face, and after doing this, he went on to attack a knife she was carrying 27 times.


Here is the heinous criminal himself:

As you can see, he is clearly a deranged sociopath, hell bent for leather, frat-boy rapist from hell, and self-purported “nice” guy.

Geez. Where is VAWA when you need it?

It is a good thing that this woman:

Was not seriously injured during this violent attack. She is going to trial for "self-defense" now - yes, self-defense - I am NOT making this up.

Plus, I heard that she is really very very sorry, and hos promised to never do anything like this ever ever again. And, she has hot titties!

With tits like that, how could she possibly be guilty of anything! After all, women are more spiritually evolved and more nurturing than men are...

Labels: does anybody even care, man guilty again 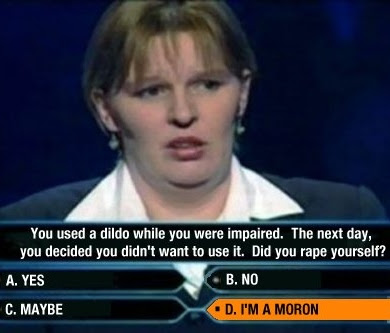 She immediately phoned the police, and told authorities that she had been raped after drinking too much, and that she had taken advantage of herself and her sexually increased mood. Some notable feminuts feminists were interviewed about this incident by RIP-Factor reporters:

And now, in order to make ourselves look like a genuine news source, we present you, the reader with some bullsh*t carpet munching factoids, designed to demonize men, and angellify women like complete lame-stream media f*ck-wits (if this doesn't get women cheering at a man getting his penis cut off, then we'll just have to try harder!): 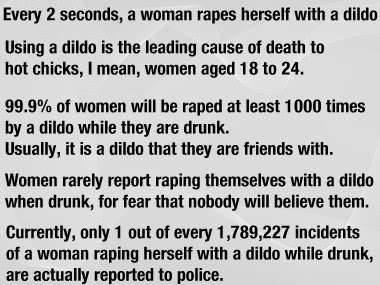 And remember everybody - violence against women must be stopped...

Violence against men - like a man being drugged, tortured, abused and sexually mutilated - gets good ratings.
Posted by Richard at 9:41 AM 5 comments: