Well, it didn't come out as good as I thought it would - but I hope you enjoy it, or get a laugh out of it.

The skinny: Some bone-head with either a philosophy degree, or some fuzzy-soft science degree wrote an essay about nice guys not "really" being nice.

1. If they are not really nice, then a different adjective should be used to describe them - the fault lies in the person making the claim. It's as jack-assed as saying, "round balls aren't really round", or "green cars aren't really green".

2. The feminist point is - you, as a man, are not allowed to morally judge your own character. It is up to a woman to point out all of your flaws. How dare you not constantly put yourself down - or let others judge you (i.e. put women in a position of moral authority above yourself).

I am sure that other things can be added to this list, but, ultimately, this is one of the ways that feminism is trying to revamp the English language - so that fewer POSITIVE adjectives can be used to describe men and boys.

This has already infected our society - as if you say "nice guy", many women have a negative reaction to it...

What's Wrong with this Picture? 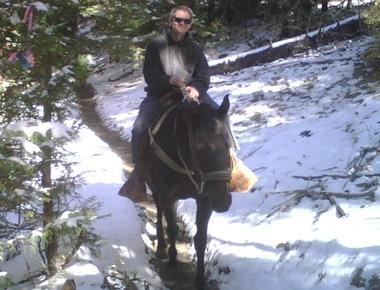 A talk a Private Investigator had with me some 7-8 years ago...


One year, for no particular reason, on New Year's Eve, I made a New Year's resolution to "do things I would not normally do". The horseback riding picture you see above is one example.

At that time, I was in a relationship, where my GF was constantly accusing me of cheating on her. I thought her accusations were absurd. However; she didn't. In fact, she actually pulled a name from the company directory I worked for at the time, and decided that was the woman I was cheating with - I of course had never heard of the woman.

Anyway, occasionally, somebody would tell me that the reason she was always accusing me, is because she was cheating on me.

I have never trusted people who have all the answers - and their answers do not have any line of reasoning behind them.

Anyway, hiring a private investigator to "spy" on my GF was among things that I would not normally do - so I hired one...

She was cheating on me with not one, not two, but three different men.

The primary one, was older than me, older than her - he was shorter than me, and shorter than her. He also wore thick coke-bottle glasses, was bald, and had a pot belly - serious pot belly... I made more money than he did, and - well - not to boast, but I eat right and exercise everyday - plus, well - nevermind...

When I did, she turned it all around, and claimed that it was my fault I was cheating on her - sufficient to say that I soon broke up with her - and got a new GF - the one that took the picture above.

I told the P.I. about her reaction to my confrontation. He gave me some advice that I'd like to share with you - especially young men out there - I list the dialog (this is not the exact dialog, but a rough estimate of what he said - it was 7-8 years ago - cut me some slack):

PI: Rich, how old were you when you first had sex?

PI: Did you actually try to pick up women before then?

PI: What kind of reaction did you get?

PI: OK, I have seen this kind of crap happen to too many guys like you, and I am going to tell you something that you aren't going to like.

PI: Women hate you. I do not know why. It's not because you're a bad person, or because you're bad looking, it's just because. Any woman you meet will hate you. The only reason any woman is going to show an interest in you is because of your money.

ME: Well, I doubt that, there are millions of women...(I was also going to add that my last name is not Rockerfeller - I have extra money, but come on, I am not "wealthy" by any means)

PI Interrupted me: Look, I have seen way too many tech guys like you get screwed over by some bitch that is just stringing him along, and this is just friendly advice. Women do not like you, they never will. Any dreams you have about a marriage, or romance - ditch them. The only thing guys like you get is robbed of your money by some woman, like the one you have now - she is trading you for somebody that looks he should be hanging around elementary schools in a raincoat.

ME: (Thinking - I never took people's answers at face value - this time, I did - why - it was not something I would normally do - see the New Year's Resolution).

PI: I have no doubt that this woman you are with is badgering you to marry her.

ME: Actually, yeah, that is true, but there is no way I'll do it. And honestly, I do not have a lot of money - I am not rich.

PI: To her, she just has to put on an act for you, and have sex with the losers she is really into, and try to get you to marry her.

ME: (Staring with a look of curiosity on my face)

PI: Yeah, if you did marry her, she would file for a divorce within 6 months or so - it's like a job, where she suddenly gets 5,000 dollars, or even more - possibly 10 or 20 thousand? Dump her. And get rid of the idea of ever marrying any woman - you'll just get robbed. Look, hire prostitutes if you want sex. Go to strip clubs. I know this isn't something you want to hear, you strike me as being a square guy, but if you were actually trying to get laid, and in your generation you did not get laid by the age of 18, women hate you - the end. Do not get married. Do not let one move in with you, and do not move in with any of them. You will only lose your money.

The conversation continued for a bit, you get the gist of it.

A message from the consciously divine feminine:


Watch it, before it gets banned as hate-speech!
Posted by Richard at 3:00 PM 7 comments:

Rape Culture Caught on Video! (and my thoughts on Game)


My objections to game - inspired by the latest avoiceformen blog radio.

Once again, here is a list of head-meds - if you meet a woman taking any of these, GET AWAY FROM HER:

Back to crazy behavior; why are so many women like that? Why do they go into meltdown so easily?

There is a 300 pound gorilla in the room that is not often mentioned - feminism.

I ask - is it possible that feminism has f*cked women up?

Let us entertain this notion.

I hear people in the "man-o-sphere" say that feminism has made women ignore their basic natural instincts. Yet, when it comes to the "game" arena, they are in fact going for their natural instincts - i.e. - going for ALPHA MALES.

When I went on my woman meeting spree, I met children who were - severely retarded, physically deformed, uncoordinated (to the point where they would severely injure themselves on various occasions).

The skinny - those children - these are not the type of children that ALPHA MALES produce. Those are the type of children that OMEGA MALES produce - retarded, deformed, and physically uncoordinated. There is a reference out there (sorry, I cannot find it, and I do not want to spend the time) - the number of mental defects and physical defects in children is increasing - and has been since 1970 or so. Of course, many people will say - it's the food, it's the radiation - no, it is women being f*cked up by feminism, and picking some severely defective men to breed with.

One re-occurring thing I kept hearing from the women I met, and I'll re-iterate

"I thought I could fix him".
"He seemed so lost without me."
"I felt like I had a lot to offer him."
"He seemed like he needed my help."

These statements do not describe ALPHA MALES, they describe men who are defective and lacking.

I would conclude that feminism has indeed screwed women up - emotionally, instinctively, and mentally. This is intuitively obvious - when you consider that it is now impossible to debate with most women. Also, look at how they vote, and who they vote for - look at the children of single mothers - retarded, deformed - this is increasing.

And, my conclusion about game - it is a placebo. It is a good luck charm. It is a confidence booster. It does not give anybody anything they do not already have. I have no objection to it - except when people charge money for it. When they charge money for it, they are exploiting men's natural desire to "pick up women" - just like a pimp.

NOPE. There is enough hatred of men already floating around out there. I see no need to contribute to this.

Well, I think it does fail to point out to men the types of women to avoid (for one's own safety). It also fails to point out that women are most likely f*cked up by a slew of wrong-headed lines of thinking that have been getting pounded into women's heads for the last 40-50 years - it simply brushes feminism under the rug, and labels women's sexual choices as "natural". That is about as jackassed as saying that "natural selection" caused the extinction of the DODO - after all, the human race "naturally selected" the DODO for extinction.

And, in case anybody is interested in the character I am. I have never "gone out of my way" or "put on an act" to get a woman. I noticed that women were f*cked up at an early age. I refuse to so much as lift a pinky to do anything to appease them. They should be the ones appeasing to me. After all, I have much to offer them (wit, humor, stability, travel, calm demeanor, big penis), they have little to offer me (just sex and that is all) - and the price tag that comes with them (PMS, psycho-entitlement behavior, headaches) just makes them NOT WORTH IT.

Stay tuned. I now have research proving that BIG BUSINESS has not profited at all from feminism.

I am starting to think that the whole "Big Business" profited - is a severe misconception (possibly a misdirection?).