Be patient - it takes a while, but it makes an excellent point - and it's funny...

Posted by Richard at 9:26 AM No comments:

It is no secret that Darth Vader has a sexually biased program when it comes to hiring Storm Troopers - they are all male. This has feminists outraged, as they believe that women should be allowed "serve" Lord Vader as well. 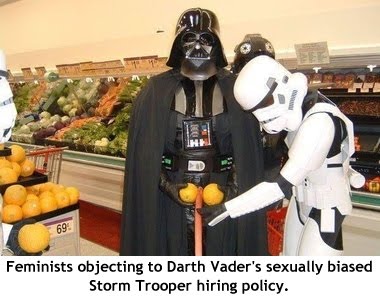 In addition to an all male militia of Storm-Troopers, feminists are also outraged by the apparent lack of female Sith-lords. One of the few female Sith Lords, Darth Syphilis, was interviewed by MEN-Factor reporters. 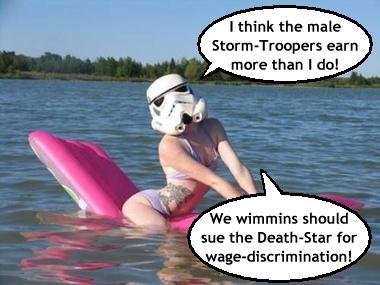 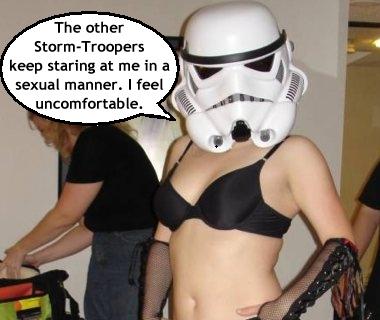 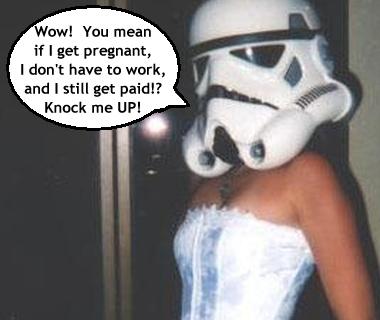 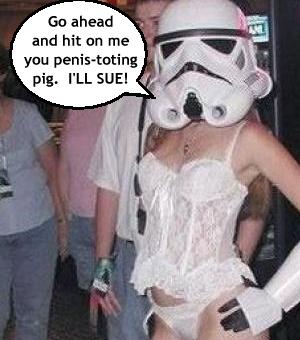 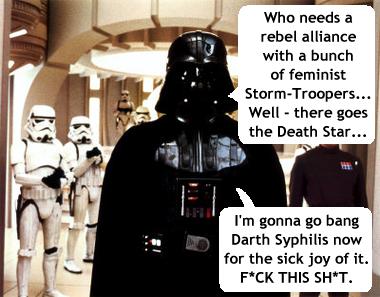 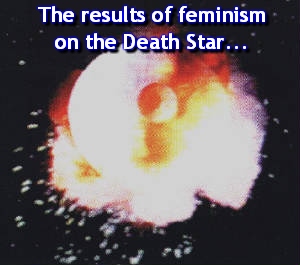 feminism - its effects on the Death Star
Posted by Richard at 9:37 AM 8 comments:

Stop Robbing me of My Manhood Ladies! LMFAO!

This just gets funnier and funnier. I was browsing the man boobz blog, and I came across this comment:

I think you're right, David. In order to have sex with ladies, men need ladies. And since our society has made sexual experience a condition of manhood, men need sex and women to verify their masculinity. Since men have no authority they can use to compel sex, women who won't have sex with men are not just not having sex with them, they're robbing the men of the social proof of their manhood.

I think you're right, David.

Thinking David is right - is a sign that no "thinking" is actually going on.

In order to have sex with ladies, men need ladies.

This is actually true guys - I think Einstein discovered this in the 50's - I'll have to wikipedia it to make sure.

And since our society has made sexual experience a condition of manhood,

Sexual experience was made by our society? not biology??

men need sex and women to verify their masculinity.

Yup - us men are simply verifying our masculinity - not like it has anything to do with propagating our species - or the fact that it feels good...

Since men have no authority they can use to compel sex,

women who won't have sex with men are not just not having sex with them,

My eyes just went a little crossed - hang on...

they're robbing the men of the social proof of their manhood.

Wiping tears off of eyes.... AHHHH - Gee, I guess that means that I have been robbed of my manhood by millions of women on this planet! OOOh - those naughty bitches!!!

That would make a seriously awesome T-shirt...

Holy crap - I'd get laid at a nun convention wearing a shirt like this.

Enjoy your followers - you've earned them!

Another irony - somebody has notified me that Dave thinks I left this comment as a troll - no Dave, I did not (he is in denial about himself and others). I am guessing that this comment was not left by any troll, but a complete whacked out bimbo who has no concept of reality - let alone men.

Again, enjoy your followers - you've earned them.
Posted by Richard at 10:52 AM 10 comments:

What Feminist Sayings should say Fridays

A bonus picture I found on the internet - I modified it a tad:

Some flaming went on this week - I have to admit - it got me riled. Sucked.

A quote of the week from Captain No Marriage

After talking about some modern women, he says:
"F*ck that, f*ck them and f*ck off!"

Matches my mood this week too!

I'm off to choke on some Ketel One - Have an excellent Friday all!
Posted by Richard at 9:12 AM 7 comments:

MEN-factor scientists were perusing the internet, and various blogs. They came across one blog in particular (that they cannot remember the name of since it was late and they were drunk tired), where a commenter by the name of ChokesOnCheese27 made the claim that there was a black hole in Kate Harding's fat ass. Here is an image from a story that CNN allegedly did on the subject:

According to theories, Kate Harding's fat ass contains a black hole that is capable of devouring both matter and light. Scientists are puzzled as to how exactly Kate Harding came to have a black hole in her fat ass in the first place.

MEN-Factor reporters allegedly asked the brilliant Stephen Hawking if he had any theories as to how Kate Harding could possibly have a black hole in her fat ass. This is what he allegedly said.


A Russian scientist, Brushney Sputnik, was also allegedly interviewed by MEN-Factor reporters. This is what he had to say:

Kate Harding being violently raped by another lesbian.

Scientists now speculate that black holes are created in women's fat asses when they engage in sexual intercourse (or at least try to) with other women.

Scientists were originally worried that the black hole in Kate Harding's fat ass might cause the moon to collide with the earth. But after a proper examination of mathematical data, they realize that her fat ass would simply envelope the moon - and hence, no harm would come to the earth.

Scientists do speculate that Kate Harding's fat ass does have the potential to wipe out entire cities however. This has the Japanese government putting its citizens on high alert:

A huge mass of fecal-ridden pond scum was the first to make a statement about the Jared Loughner shootings. This mass of mutated manure claimed that somehow, another politician was to blame for the shootings - and not the shooter himself.

The crazy collection of crap known as "Sheriff Dipshit Dupnik" immediately started spewing senseless suppositions that the shooter himself, who clearly showed signs of mental illness, was somehow not to blame.

To people who have I.Q.'s higher than 12, this would seems bizarre, and strange. How is it that somebody shoots several people - and through some lunatic line of logic, that person is not responsible?

Quite a few of the kooky columnists that constitute our lame main stream media were stupid enough to swallow the spewing of Sheriff Dipshit Dupnik. These jar-headed journalists believe that another politician was somehow responsible - and because of her hate-filled rhetoric, she is a god-damned piece of sh*t hate-spewing filthy little pissy sh*t a$$hole b*tch c*nt f*ck.

In order to show their support for the victims of this tragic shooting, the Smellogg's corporation is proposing to introduce a new line of cereal - proceeds will go to various charities that will not actually help any of the victims or their families - but will give some free-loafer's money for doing their favorite thing - being leeches.

Attention $hit and run commenters - I have no love of Sarah Palin - so please - do not accuse me of coddling up to her here - this post is bashing Sheriff Dipshit Dupnik and exposing his errors - bashing somebody who is accusing others of being witches does not make me a witch - you evolved and enlightened liberals you... Yes, I do bash the right - see here - and no, I do not have an inflatable Sarah Palin love doll either - lay off the funny cigarettes dudes.

WARNING: Apparently, some people believe that Angry Harry is "coddling up" with Sarah Palin because of his quote below - to them I say "You're full of it". Criticizing the left wing and their hypocrites in the media does not make somebody a RIGHT-WINGER. Nor does it mean that they are "coddling" to any right-wingers. It merely means that they are criticizing the left.

Also, for the retards I mention above - If somebody refuses to believe that witches exist - it does NOT mean that they themselves are a witch.

Please, stop smoking those funny home-made cigarettes and move out of your parent's basement if you think any of these things are true.

Thanks and have a GREAT day!

I offer you the quote of the week from Angry Harry (in reference to Jared Loughner's shooting spree):

The actual text of the quote:

Reading about these revolting hypocrites in the Democratic party blaming Sarah Palin for the actions of this somewhat deranged killer makes me feel ill.

These left-wing bigots have spent the past two decades purposely stirring up racial tensions as well as hatred towards men.

Goodness knows how many thousands of men have died or have been seriously harmed as a result of the malicious activities of these disgusting people.

And this is not even to mention the millions of families that have been purposely broken up by them.

These people are forever seeking to stir up societal disharmony and hatred.

What a nerve they have.

The only good news is that these wicked people are going to face an increasing backlash - a backlash that I hope will grow so big that their political clout and their careers are permanently destroyed through the ballot box.

Thank You Angry Harry!
Posted by Richard at 9:04 AM 3 comments:

Invasion of the Vagina Men

The following story is fictional. Any resemblance to real people is purely coincidental