For those of you who have never seen it, or do not remember it, this was the popular clay-mation that featured the freeze-miser and the heat-miser who were fighting over whether to have a green or white Christmas.

Wacky woman O'Donnell was scheduled to do a song of her own fitting the format of the Freeze-Miser and the Heat-Miser. Unfortunately, network censors decided to pull the song from the batty bimbo at the last moment.

The song featured crazy Christine, the round the bend republican as Misses Blue-Balls. 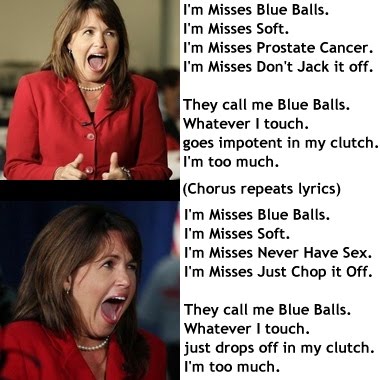 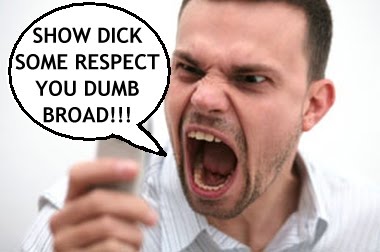 Christine O'Donnell
Posted by Richard at 1:41 PM No comments:

Dirty Skanky Whore with no Brains Who "Puts Out" for Physically Abusive Men is Missing and Probably Dead.

Jason Omar Griffith - good golly! What a STUD-MUFFIN! They don't get any better looking than this do they ladies!!!!

The fact that she is now missing, and there were allegations of abuse by Jason Griffith have most American women all thinking the same thing:

Most American woman are now happy that another psychotic man has once again joined the singles scene and could make them a potential mate and possibly as an extra bonus - a murderer too!

A moment of seriousness:

I ran this past two of my friends - they said this was going too far - maybe it is.

To start, I was raised to have respect for all life. I have stuck to my upbringing for the larger part of my life. Perhaps I am turning into a sour old fart - but - I have seen crap like this way too often in my life - and it has actually bled over into my life on a few occasions (see the links at the bottom).

I have met too many women like this - and - yes - been treated with hostility by them (or seen them treat other men like me with hostility) when no hostility was called for. Later of course - I hear stories about them getting beaten or killed by some psychotic dick-weed.

Do I still care?

I was yelled at in a grocery store by a stripper, later to be accused of her murder.

I was asked by a co-worker if I killed Brianna Denison.

When I was young - they were nothing but trouble - and I did not even reap the "benefits" of such women (i.e. sex).

Heidi Jones at it Again; Sources Allege she now claims to have been Raped by Captain Crunch and Big Bird


MEN-Factor reporters have spoken to alleged witness to the new affair, and the team of MEN-Factor artists were able to compile these dramatic images of what might have allegedly happened to Heidi Jones

Heidi Jones - reports indicate that she claims to have been raped by Captain Crunch and Big Bird.

Heidi Jones - one of her alleged attackers was Captain Crunch.

Although sources indicate that Heidi Jones has been thoroughly traumatized by this latest incident, reports indicate that she is being a very brave woman, proceeding with her life as though the incident mysteriously never allegedly happened - GET OPRAH ON THE PHONE!

Heidi Jones - what she might be doing after this latest alleged incident.

Man Violently attacks Several Women's Feet with his Face on Bus; Feminists Press for V.A.W.F.A. to be Passed

The incident in the video above has feminists and dickless clowns like Joe Biden and Obama Sin Laden pressing for new legislation that is a spin-off of V.A.W.A. (The Violence Against Women Act).

Feminist leaders are pressing for the new V.A.W.F.A (The Violence Against Women's Feet Act) to be passed, after this man violently attacked some women's feet with his face on a public bus.

MEN-Factor reporters allegedly interviewed Joe Biden, this is what he allegedly said.

MEN-Factor reporters also allegedly interviewed Hillary Clinton, this is what she allegedly said:

Now, like any main-stream media outlet, we are going to present you with a slew of bogus statistics that are in no way credible, but they should frighten, shock and horrify you into either donating money to sh*t causes, or helping pass sh*t legislation:

The above facts are whorifying horrifying indeed.

Please make a donation to the "Save Women's Feet from Men's Faces Foundation" today!
Posted by Richard at 9:49 AM 8 comments:

It appears that Julian Assange has posted a bond.

In case anybody is wondering, Julian Assange has been accused of rape by Sofia Wilen, and Anna Ardin.

The first dirty, filthy, skanky, rat-faced little whore that is accusing Julian Assange is Sofia Wilen. It has been speculated that Sofia Wilen likes to pretend that she is Bugs Bunny, and play "spaceman" with her own fecal matter:

The second smelly, distasteful, rat-faced, whoring, waste of human skin to accuse Julian Assange is called Anna Ardin. There have been several speculations of Anna Ardin; She actually charges money to accuse men of rape; she frequently has "accidents" in her pants; she smells bad in her vaginal region:

This has been a re-cap of the Julian Assange case. Thank you.
Posted by Richard at 9:31 AM 4 comments:


Reporters at "The Atlantic" clearly take what Hanna Rosin says seriously - which is particularly disturbing considering the fact that all the people who run "The Atlantic" are in theory full-grown adults.

As you can see from the cover above, Hanna Rosin's video is portrayed as being very scary and frightful. However, when MEN-Factor reporters examined another cover:

They noticed that "The Atlantic" was trying to blame the housing crisis on Christianity. Yes, you heard that right - unlike many people who blame the housing crisis on Negros, Jews, Hispanics, or whatever group of people they tend to be prejudiced against, "The Atlantic" decided to try a different angle; and blame an entire religion. After all, it's not like the banks giving out exploding interest loans like candy had anything to do with it - nope it was all those nasty Christian's fault. MEN-Factor reporters did not have the time or patience to bother reading the above garbage, but they wondered if the proposed solution to those nasty filthy Christians was to throw them to the lions...

The cover above is an excellent indicator that "The Atlantic" is yet another western publication that is run by f*cktards and morons - just like "The Washington Post".


Despite all the hype, we at the MEN-Factor have a very simple message for Hanna Rosin:

Washington Post Prints Article by Jessica Valenti: Reinforces the Science Patrol's Theories that the Washing Post is run by F*cktards and Morons!

Of course, any nit-wit with half a brain knows the truth about rape in America: It is blown out of proportion by zealots, greed, and male-hate-mongers who have created an atmosphere of hysteria so thick you can cut it with a knife. The Assange case really does not reveal anything new about the sickening male-hating attitudes in America. What the article DOES reveal, or at least enforce, is the alleged theory by the Science Patrol - that the Washington Post is run by morons and f*cktards.

The Science Patrol is already taking militant actions to stop the spread of feminist lies in Japan - but they may already be too late:

The Washington Post article by Jessica Valenti is allegedly counter-attacked by the Science Patrol.
Posted by Richard at 2:24 PM 2 comments:

Anna Ardin (Ardinn?) has accused Julian Assange of rape (or sexual misconduct if you are unlucky enough to live in Sweden).

It has been alleged that Anna Ardin is a skanky, two-faced, bougar-eating, rat-faced smelly little git of a woman.

MEN-Factor reporters decided to delve deeper into the subject that is Anna Ardin.

If the alleged allegations are allegedly correct, here are some artists conceptions of things that Anna Ardinn might be saying to our reporters, if they allegedly interviewed her:

Anna Ardin: It is possible, that she actually charges money to go around accusing men of raping her. In fact, according to our calculations, such a women could in fact gross more than 8 million dollars a year if she charged roughly 100 dollars per accusation, and reported being raped at least 80,000 times each year!

Anna Ardin: If she had severe bowel problems, she might frequently have "accidents" in her pants. This would make her frequently smelly. MEN-Factor scientists and proctologists are somewhat weary of this theory however, as this would make sexual intercourse with her extremely distasteful; hence, Julian Assange most likely would not have even looked twice at her.

Anna Ardin: another hypothesis about Anna, is that her vaginal area is extremely stinky. If she were fed a constant diet of chili-cheese burritos and Ding-Dong candy treats, her pubic sweat and vaginal fluids would have very distinct and repulsive odors. This speculation has also been discredited, as most people in a 10 foot radius of here would be "dropping like flies" according to our sources.