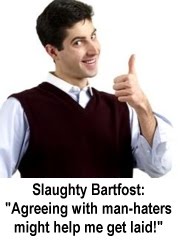 One brain-washed male-hating woman on the Dickless campus told reporters, "I am afraid of what his penis might do to me - assuming that he even has one. I am too used to the idea of hating male sex organs, and thinking of them as being evil and bad to want anything to do with one - but if it will make a political point, and encourage other of those men-things to agree with male-hatred and feminism, I might just be psychotic enough to do it. I'll have to take some extra Lithium and be severely doped up though. Hell, I'd f**k myself if I thought it would help society grant me more privileges - I MEAN RIGHTS."
Posted by Richard at 2:22 PM