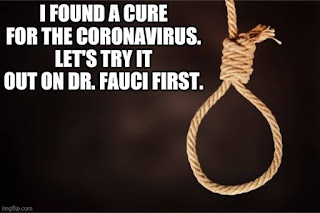 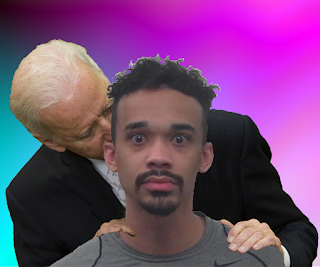 What are the Odds!? 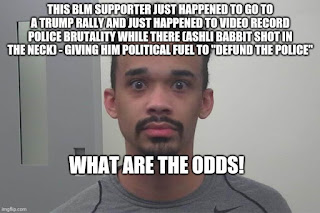 They really are putting on a good dog and pony show for us aren't they? Fake news with fake riots, fake flags, all kinds of B.S. is happening right now (some suggest that even the corona virus is fake...). 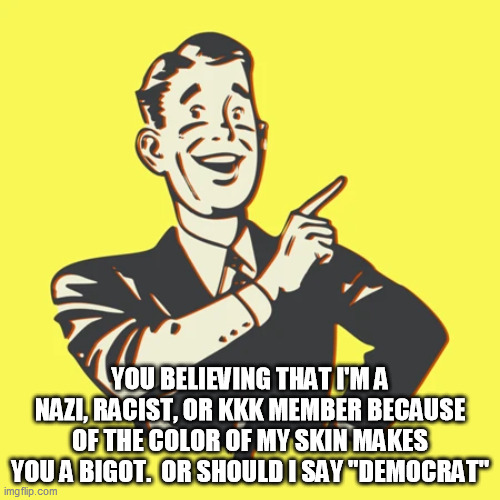 Anyway, I offer my own "fact-checking" here - use your HEAD and not the internet or T.V. (or even me) to decide if you agree - for real - and you feminists - you claim you all like to think for yourself and use your mind.  Ask yourselves if that is really true.

2016 - Donald J. Trump is elected as the 45th president of the United States.  For the next THREE and a HALF YEARS, all main stream media stations are fixated on how the election was hacked, and that Donald Trump was a Russian agent, and that Russian bots used Twitter and Facebook to influence people to vote for Donald Trump - remember that - yes - it went on for THREE AND A HALF YEARS.

You lefty twirps can snopes or fact check that all you want.  Anybody with a brain knows it is:

What some of you brain-washed twirps who are glued to CNN, MSNBC, NBC, ABC, CBS, FOX and the like might not know is... This is what Nancy Pelosi tweeted in 2017: 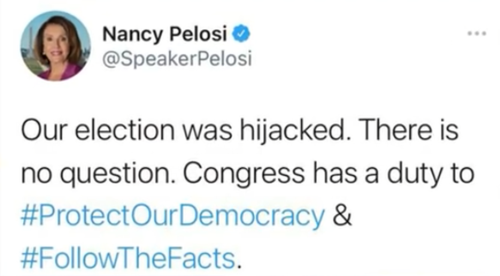 Yes, she really tweeted this.  And she was NOT declared a domestic terrorist by the Trump team or any righties for doing so.

Now, you lefties can snopes and fact check all over this.  Sorry, it is:

The same media channels that told us for THREE and a HALF YEARS (even after they knew it was false) - are now telling us that EYEWITNESSES, VIDEO, and MATHEMATICAL ANALYSIS are all various forms of BASELESS EVIDENCE!  And that Joe Biden like totally won and stuff!

If they lied to everybody for THREE and a HALF YEARS, why would anybody with a functioning brain believe to them now?  Why are they still viewed as credible by some people?

So, here is my fact-check.

The media lied to the American public for THREE and a HALF YEARS about all kinds of NOTHING BURGER style CONSPIRACY THEORIES about Russian bots and the like - yet, many people still believe that what these news casts say is credible somehow.

It is a shame there are so many people who are so gullible in the world today (and our nation).

Throughout the summer of 2020, we were bombarded with images of black men (and sometimes women) being injured or killed by the police (sometime dying horrible deaths).  Any sane rational person would react negatively to video of human beings dying - moreso when it appears to be at the hands of another human being.  This is because most people are civilized.

It is the smart people (who are far and few) who will stop to ask themselves, "Why is the T.V./Internet bombarding me with scenes and images of these people dying?"

It is the even smarter people who will ask themselves, "Why are they trying to get black people so worked up by showing only black people in trouble with the police - and never other races?"

What were our politicians (the lefties) doing during these riots?  Shout out to QUARTERMAIN for one of his memes: 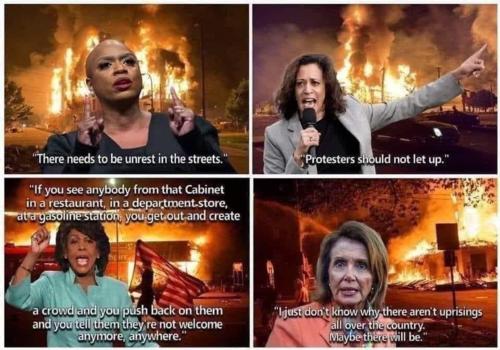 The lefty politicians were ENCOURAGING the riots.  They were not trying to stop them.  The riots over the summer did TWO BILLION dollars in damages to property.

Now, let us go back to the whole GET BLACK PEOPLE WORKED UP BY BOMBARDING THEM WITH IMAGES OF BLACK PEOPLE DYING HORRIBLY - as was done by the media for many years.

Why would they do this?  Why not target Latinos, Asians, Persians, or even Caucasians?  For real - why Blacks?

The answer to this is a simple one.  To these people (mostly white lefties and a few black lefties), black people are mere tools.  Nothing more.  Just as in the days of slavery in this country, these politicians do not see blacks as actual people with hopes, dreams, ambitions, needs, or wants - they are just tools to use and exploit.  And so easy to control by just showing awful images on the telly too.

Ask Joe Biden - Our new President - he's been keeping them in the ghetto for 47 years now.

It is handy for the lefties to have a group of people that the lefties consider to be sub-humans, that are easy to control and manipulate.  Why are they easy to manipulate?  Poor education, poor job opportunities and what not - blacks are kept in the ghetto by the left politicians (and some on the right), so they can be easily manipulated and used.

It is more useful, when you start labeling your political opponents as KKK Members, Nazis, White Supremacists, or Racists.  A rather boorishly predictable, yet effective, divide and conquer tactic.

It is something akin to the psycho girlfriend - who constantly puts you on the defensive.  You are so busy defending yourself against outrageous accusations (like say, "you're a racist"), that you never stop to ponder the CONTENT OF THEIR CHARACTER.

All effective tactics, and all transparent to so many of us.

It is almost like the events of the past year were designed to get all of us smart, thinking and fighting people outraged to take action.

Well, take action many people did, and look at what SPIN the main stream media put on it.  We know that some of the people who stormed the Capitol Building on January 6th were antifa/BLM.  Yet, for some odd reason (not at all odd to thinking people), the same main stream media that lied to us for THREE and a HALF YEARS is now telling us that no antifa/BLM agitators were present.  Sadly, many ignorant people are buying that.

Seriously odd too if you think about it.  This is how true tyrants work.  They immediately declare their opposition as criminals.  Why are so few people seeing this?  Why are many people still insisting that Trump was the tyrant?  He never suggested legislation declaring his opposition as terrorists - he never wanted to remove duly elected officials either.  All of this is being discussed by lefties and some righties as we speak!

This is something that should never have been discussed in America.  But it was - and there is no going back after it.

Political opponents in America can now be labeled as domestic terrorists.

America is OVER - It no longer exists.

Anyway, I am done rambling.

Now is NOT the time for any physical action or political violence.

Listen to your President:

...while you can (before some commie YouTube moderator pulls it for hate speech) and while he is still your President and not completely censored by tech nerds.

What I am doing, is writing letters to politicians in the state of Nevada, asking them what they plan to do about the 42,000 people who voted more than once.

Is voting more than once a crime?

If it is, why are no arrests being made?

If no arrests have been made - it must be OK?  Right!?

Who are the people in Nevada that get to vote more than once?

Do they have to pay more taxes than people who don't?

Of course, I have gotten no response from ANY OF THEM.  And that silence from their part speaks louder than any response they could have given - doesn't it?

I think I am done posting.  Not just this post, but the rest of my life.  I am going to start a new blog.  I do not support feminism.  I see now that feminism was also a tool (as women are tools for the political elite).  Turn women against men, turn blacks against whites etc...  It was just one tool - a divide and conquer tactic among many - used by the political elite.

What I need to fight, is that.  America has been destroyed by these people.  College professors who poisoned their students minds.  Feminist instructors tainting young women to believe men are the enemy.  False institutions claiming to end bigotry - but just introducing their own bigotry.  It has all been part of the plan to destroy this great country.  I was focused on just one piece.  I should have been focused on all of it - and in the future I will be.  I'm not done, and there are a LOT of criminals that need to be brought to justice.

I leave you with this picture, as I ask you: 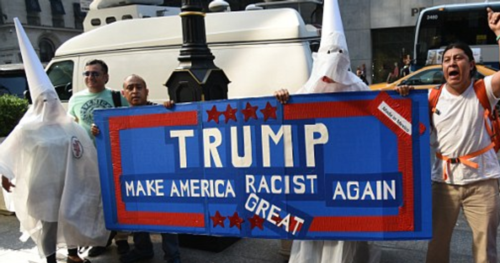 Who is doing the hating?  Is Trump a racist?  Or are the people in the picture above just looking for a false excuse to hate?

We've all see similar pictures showing feminists holding nasty signs about men haven't we?
And there is no debate among us who the haters are is there?

link
These antifa guys break the law, and they are never convicted.
Many times, they don't even need to pay bail.
Does anybody know why this is?
We saw the same double standards all summer long too.  Kyle Rittenhouse had the book thrown at him.  People rioting and whatnot - are walking around free.
If you know, please let me know below.
Posted by ScareCrow at 7:00 PM 4 comments:

They're Putting on a Good Show aren't They?

I'm talking about the police, and antifa.

We had a good show from them over the summer.

I saw rioters shooting guns in the air, and starting dumpster fires.

I heard somebody shout, "Timeout, somebody's been shot!" when Kyle Rittenhouse (the only person charged during the Kenosha riot) shot somebody.

Now, I'm seeing videos of antifa beating people up while the police do nothing but stare.

All this is designed to enrage people.

There is a time and place for everything.

This is not it. 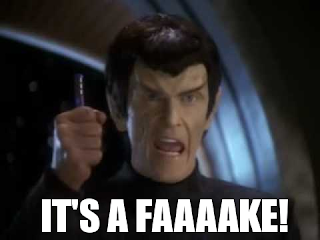 The Trump supporters on January 6th were angry.

Look at what's happening to them.

A vision of things to come?

Most likely, but those people were goaded and setup.  The goading is ongoing.  Don't be fooled by it.

Removal of First Amendment by Apple, Google, and Amazon

Google and Apple removed the Parler app from their stores today - so no Apple users can get it, and android users will have to get a pirate version.

Now, Amazon appears to have pulled it from their servers, as it no longer functions.

So - kiss your freedom of speech goodbye!

My guess is guns are next. 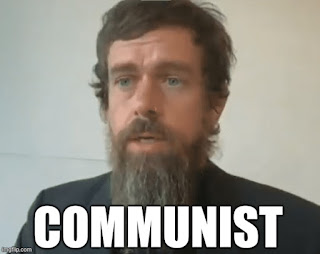